High time for an update I think, especially given the nature of my last post.

My mind is slightly better, in that all the advice I received, especially from Sue and Sam on here, Holly on f/b, and from all of my other friends, was most helpful.

The busy-ness of life also has played it's hand which has not allowed me much thinking time lately.

My plan is when I feel ready, I am going to go to my GP and ask if I can be referred to a psych.

Opportunities to dress have stopped again, due to Son being here in the daytime again. He is also still very much under the threat of redundancy, bless him. Not fun when you are 25 and reasonably intelligent. He actually has turned out to be one person I can openly discuss my T-ness with, and I've felt so comfortable I've worn eye make up in the day and there has been no issue. I couldn't get away with that with the girls in the house.

On that subject, no 1 daughter is still in boyfriend mess. There is a lot to do there, and both me and Mrs T have no real idea how to snap her out of her upset? We've both stayed out of it so far, but it's getting harder and harder.

It was our anniversary on Friday last, and although we don't celebrate, the interim ones, I made her a card. It was our 27th. I wrote some words in the card to re-assure her that I will always love her, whatever the future throws our way.

The week-end was quite good. I decided to cook a 3-course meal for Mrs T on Saturday and it went down really well. (Actually, I was quite proud of myself. Home-made Prawn and Spring Onion Ravioli to start, Bangladeshi Monkfish and Prawn curry as main, and a wicked fried Banana with an amazing home-made sauce for dessert.)

As I had pasta left over, I made some more Ravioli (cheese and ham) for a starter last night, all served with a home made garlic sauce.

One more thing I did yesterday was to sort out and clean the spice cupboard. I was always moaning at the state of it, so Mrs T 'encouraged' me to do something about it.

I suppose all in all, a big brownie points week-end.

So where to next? In 2 weeks, I intend to push Tina's boundaries once again by going to Sue's London lunch. I haven't been before, but having been in Sue's company on two previous occasions for eating, I have no worries about going. The hard bit is leaving the house in daylight, (not being out to anyone much else), and travelling on the train. I am not too nervous. Actually very, very excited.

I guess I see it as another milestone 'ticked' on the path to acceptance?

I'm also booked into Sparkle and have my train tickets, so as per last year, I'm looking forward to that too.

It's not surprising as I really believe that when I am fully out in public I am proving I am the real me.

That's all I have to say today. Until next time good readers.

Posted by Tina Natalie-Scott at Monday, April 30, 2012 No comments:

Where is my mind?

I've chosen the title due to my topsy-turvy feelings, which I am trying to get my head around right now.

It's not that I am down in the dumps too much, or the reverse - it's where I am at and where I am going that is filling my thoughts today.

I've just spent 2 days dressed, after a while of not being able to do much. The feelings of euphoria and 'rightness', came flooding back. So much so, that I was very close to not changing back, when people were due home. This happened both days.

So it started me thinking? Am I content with how I am now, with occasional dressing and the odd journey out?

Well, if I'm brutally honest no, I'm not. The feelings I have when I am dressed overwhelm me. I just feel so, so good! So, so right. But where to go? Just more dressing? No, I don't think that is the whole answer. OK here comes the bombshell number one - I think I'm actually ready to go full time! There I've said it!

Yes I know the problems that would bring and I probably haven't even thought of all of them...and I know this is very much a selfish feeling and desire. I do increasingly feel its right for me though. Perhaps I could do with some help to talk it through more?

Well there we are, my scrambled head. But wait, that's not all...

Today, it got worse. I'll go straight for it...there was I just relaxing after lunch before returning to work and a thought struck me. Could I actually ever see myself having GRS? Whenever I've had that thought (being part of Angels means your surrounded by this course of action) before, I've always ruled it out.

Today was different. For the first time ever, the answer was "yes I could". Bombshell number two. Furthermore, I let my mind wander a bit more and I think, actually, this is what my goal may now be? The problems with that are of course even more serious than going full time. All this has rather taken me aback and I feel almost guilty for daring to think/dream along these lines. I want to tell Mrs T, but I'm very afraid of the consequences.

Perhaps it's just a silly phase that I'm going through? (Ouch, my head hurts!)

Well, that's a load at least down in words, which helps a bit.

What else is there to say today? Well, I've been experimenting further with a half and half eye shadow look, with pink in the first half of the lid and grey in the second (towards the outside of the face). I have to say I love it! I need to try some more colours, but I'm getting much better at blending (my recently acquired brush/blender from Avon is great). I've also started to go a bit heavier on eye liner, which is giving me a sultry, (dare I say even sexy?) look.

I wanted to take a picture, but I've been lazy in the face hair department (failed to buy expensive blades), and so I wasn't happy with the overall look today. Need to go shopping. So much Tina needs!

I did want to go to the Nottingham Invasion, but a combination of things - Mrs T mostly (I did so enjoy the A-Team comments on Facebook!), will prevent me going. I really want to meet some more people as well as the lovely girls I already know. The good news is that Sue is organising a London lunch and at last it looks like I can go. I HAVE to go, for so many reasons.

Yesterday I finally got around to seeing the last episode of "My Transexual Summer", and I have to say I cried a lot at the end. I loved the programme, because I am one of them. I'm the same. I wish I was as young as some of them, but hey ho, I'm glad I am what I am.

Well that's it. A fairly serious blog, but being trans isn't all fun.

It's been a while again. No excuse really.

Things are settling down still here in the madhouse.

My femme feelings are as strong as ever, but dressing time is now back to a premium again due to my Son being back on nights. It's Easter hols which means a full house anyway due to school-based other householders. Bah!

I failed miserably to post another pic I took during the last dressing time. I called it 'all dressed up with nowhere  to go', which summed up my feelings nicely. Anyway, here it is. 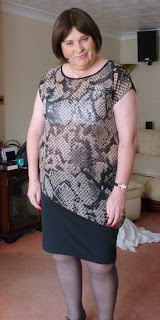 Need to add a vest top underneath as it's a bit see-through...

Managed to get some shopping time last week, which resulted in another top from Yours. Got some shoes from them as well, but unbelievably, they didn't fit -too big!

Ordered some new clip-on earring adaptors after following a link on the 'Pierced Ears' thread on Angels. Looking forward to trying them out. Wish I get get my ears done, however, Mrs T will not allow. Any suggestions of how to persuade her?

Still no prospect of any trips out yet, which is annoying. However, booked in for Sparkle now and looking forward to it very much.

Oh, I nearly forgot. As no one apart from Mrs T was in the house all of Sunday, I asked if I could dress for the afternoon. She didn't say no, so I did. I didn't go too OTT, just leggings and the top in the previous post. Had a great result on a two-colour blended eye-shadow theme, grey into pink, which I copied from a girl I saw on the train the other day. It was the first time I really got blending right. Can't wait to try that out again. Need to get some more colours now. Is there any end to this shopping? :-)))

I could tell Mrs T didn't really like me being dressed in the house, but it's not as if she hasn't seen me dressed several times now. I thought actually it was another small victory in my quest for acceptance (if not full-time-ness!)

and that's where we are.