It's been a while since I last wrote anything. Mainly due to lack of time. It sure has been busy of late.

Things have settled down in our household a little. It has been a tough 2 weeks or so with my daughter. She was also doing quite well of late, having got to the 'resigned to what is what' stage, and having reached the 'angry' stage. That was until she got an awful text last night, and now we are back to square one!

What it is no longer doing is affecting me as Tina. This due to one essential thing - my son is off nights and on days for 2 weeks. Therefore the house is all mine from 8:30 to 3:30 Tuesday to Thursday, and that means during those times, I live as Tina...and bloody good it is too!

The immediate benefit has been that I've been able to try some new things on that have been bought weeks ago. 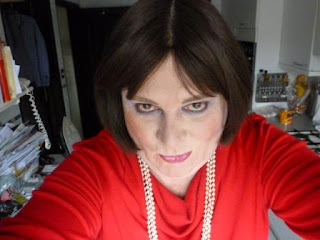 Yesterday, I wore a black pencil skirt from New Look. I've not tried this style before, and it made me look a bit younger I think? Showing knees too! I wore it with my bright red knitted top from Marks. I felt great! I took loads of pictures as well. Here's a couple -  one thing that perhaps I shouldn't admit was that with this look, for probably the first time, I felt sexy as a woman! 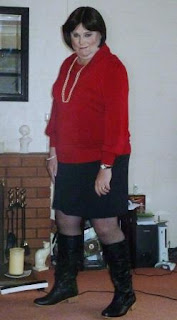 Today I was able to try a new floaty long top from Yours. Mrs T suggested wearing with leggings and I think it looks OK, but does nothing to hide my size. I like it though. Must try with jeans! Oh well, there is always tomorrow! 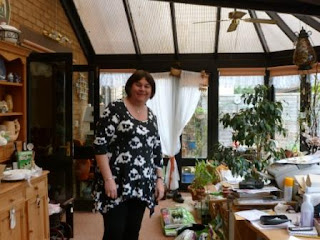 All that continues to bug me now is not going out. I feel so, so comfortable being a woman, I just want to be like it all of the time. One day, I just know I will burst and tell everybody...

Until the next time readers,